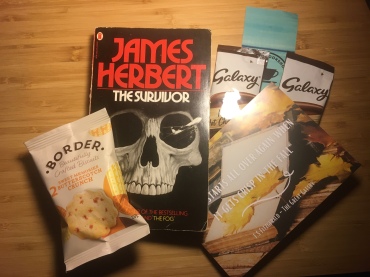 Hello my fellow bookworms, I am excited to share my surprise fourth vintage book box from the Teatime Bookshop! For those with a good memory you will know I only took out a three month subscription, however it turns it auto renews unless cancelled… so looks like I’ll have to endure three more boxes of treats! 😁

This time I received two sachets of Galaxy hot chocolate; a packet of butterscotch crunch biscuits, a promotional bookmark and postcard; and a copy of the vintage horror The Survivor by James Herbert, which was published in 1976.

It had been one of the worst crashes in airline history, killing over 300 people, and leaving only one survivor. Now the dead were buried and the town of Eton tried to forget. . . . Until the young girl was found, screaming hysterically about malevolently grinning dolls and creatures of darkness. Until the fisherman’s body was brought ashore, his face set in a grimace of utter terror. Until the priest was discovered cringing beneath the altar. Then the town was forced to face the shocking, dreadful truth about what was buried in the old graveyard.

I have not read anything by James Herbert, however my dad went through a phase of reading his books, as a younger man; so we checked his bookcase, where we found he does have a copy of this, but it is a latter edition with a different cover. I prefer the cover on this edition, though I might be biased. 😉

If you are interested, the Teatime Bookshop is a wonderful online bookshop that offers subscription book boxes, that help to recycle books, plant trees and bring a little joy each month. I am pleased with my fourth, if unexpected, box which is the first one in another three month subscription.

What do you think of what I got? Have you read anything by James Herbert? Are you signed up for any book boxes?